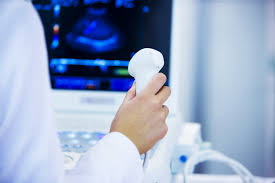 Ultrasound is safe and painless and produces pictures of the inside of the body using sound waves. Also called ultrasound scanning or sonography it involves the use of a small transducer (probe) and ultrasound gel placed directly on the skin. High-frequency sound waves are transmitted from the probe through the gel into the body. The transducer collects the sounds that bounce back and a computer then uses those sound waves to create an image.

Ultrasound examinations do not use ionizing radiation (as used in x-rays) and therefore there is no radiation exposure to the patient. Because ultrasound images are captured in real-time, they can show the structure and movement of the body’s internal organs, as well as blood flowing through blood vessels.

Ultrasound images of the musculoskeletal system provide pictures of muscles, tendons, ligaments, joints and soft tissue throughout the body.

Ultrasound scanners consist of a console containing a computer and electronics, a video display screen and a transducer that is used to do the scanning. The transducer is a small hand-held device attached to the scanner by a cord. The transducer sends out inaudible high frequency sound waves into the body and then listens for the returning echoes from the tissues in the body.

The ultrasound image is immediately visible on a video display screen that looks like a computer or television monitor. The image is created based on the amplitude (loudness), frequency (pitch) and time it takes for the ultrasound signal to return from the area of the patient being examined to the transducer (the device used to examine the patient), as well as the type of body structure and composition of body tissue through which the sound travels. A small amount of gel is put on the skin to allow the sound waves to travel back and forth from the transducer.

In an ultrasound examination, a transducer both sends the sound waves and receives the echoing waves. When the transducer is pressed against the skin, it directs small pulses of inaudible, high-frequency sound waves into the body. As the sound waves bounce off internal organs, fluids and tissues, the sensitive microphone in the transducer records tiny changes in the sound’s pitch and direction. These signature waves are instantly measured and displayed by a computer, which in turn creates a real-time picture on the monitor. One or more frames of the moving pictures are typically captured as still images. Small loops of the moving “real time” images may also be saved.

After you are positioned on the examination table, the radiologist or sonographer will apply a warm water-based gel to the area of the body being studied. The gel will help the transducer make secure contact with the body and eliminate air pockets between the transducer and the skin that can block the sound waves from passing into your body. The transducer is placed on the body and moved back and forth over the area of interest until the desired images are captured.

There is usually no discomfort from pressure as the transducer is pressed against the area being examined. However, if scanning is performed over an area of tenderness, you may feel pressure or minor pain from the transducer.

After an ultrasound examination, you should be able to resume your normal activities immediately.

Most ultrasound scanning is non-invasive (no needles or injections).  Occasionally, an ultrasound exam may be temporarily uncomfortable, but it is almost never painful.  Ultrasound imaging is extremely safe and does not use any ionizing radiation and gives a clear picture of soft tissues that do not show up well on x-ray images.

Ultrasound can be an excellent alternative to MRI for claustrophobic patients.  Compared to MRI, ultrasound may provide greater internal detail when assessing soft tissue structures such as tendons and nerves.

Because ultrasound images are captured in real time, they can show the movement of a soft tissue structure such as a tendon, joint or an extremity.

We look forward to hearing from you. Staying safe on a night out